Empowering the Next Generation: Stephanie Wash 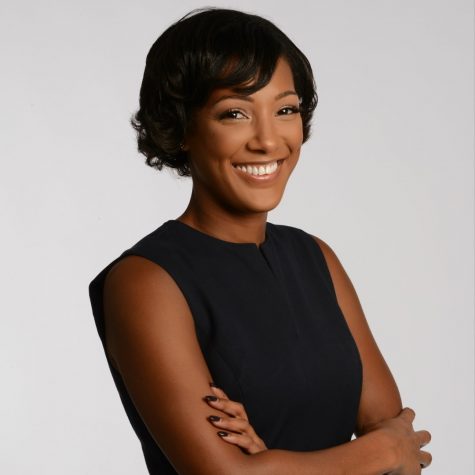 How would you react if you had the chance to meet your childhood role model? This story, related by Stephanie Wash ’04, Notre Dame Academy’s first guest speaker  in the “See It to Be It” series launched on March 2, talks about just that.

Wash stated, “I began covering the George Zimmerman trial and got to know the family of Treyvon (Martin) and their attorney after court wraps. When the trial was over, Barbara Walters (my idol) was supposed to interview George Zimmerman, and although this interview never occurred, at the time, plans were being made to organize it. I knew this case better than anything, after the long hours I had spent sitting in the court room and so I was called to a meeting in the great Barbara Walters’ office. As she was briefing one of the other ABC producers, something that was shared was not true. Hearing this I muttered, “That’s not true.” My boss looked at me and asked me to repeat myself. This time I said it louder, “That’s not true.” Barbara Walters looked up from her desk and asked me to come sit by her. She then said words I will never forget: “You are the only one who knows anything about anything!”

Wash described this as her “See It to Be It” moment. She explained that had it not been for her boss telling her to speak up or Barbara Walters giving her the confidence to express what she knew, she would not be where she is today. Alongside these words of encouragement from her idol, Stephanie also attributes many of her successes to the lessons she learned at NDA.

Although she was hesitant at first to attend an all-girls school, Stephanie believes that many of her finest moments have been inspired by what she was taught early in life at NDA. Stephanie talked at length about her freshman homeroom and English teacher, Sister Mary, and the effects Sister Mary had on her life. She described Sister Mary as “the epitome of grace, extremely strong and stern, yet gentle.” Sister Mary helped Stephanie to always give 110% on all her assignments and to never take short cuts–a lesson that helped her secure her job at ABC. NDA gave Stephanie the self-assurance and discipline that has not only helped her to elevate through the ranks of ABC and have incredible experiences, but it has also prepared her for life in general by making her confident and unflinching in her ideas, whether she is presenting to a corporate meeting or simply expressing her opinion. Stephanie Wash showed the NDA community how perseverance, hard work, and leadership could affect their lives and why having and becoming a female role model is so important.

When asked why female leaders are so desperately needed, Stephanie had many thoughts to express. She started out by mentioning the traits she noticed in female leaders and in herself, such as the ability to create 100 scenarios and follow through with the best one. She also noted women’s ability to be intentional and deep thinkers. She also discussed the fact that women can be “excellent mentors.” It always helps to have someone to look up to and someone who inspires you. By seeing someone who is like you in mind and spirit, you are given the confidence to believe you can be her. Most importantly, Stephanie mentioned that it is “about time” women leaders were on the rise. It is time to see some female representation in places where there never has been any before. Stephanie wisely closed with these words, “Having female leaders should be a given, it should just happen.” Her words have most likely inspired the next generation right here at NDA.