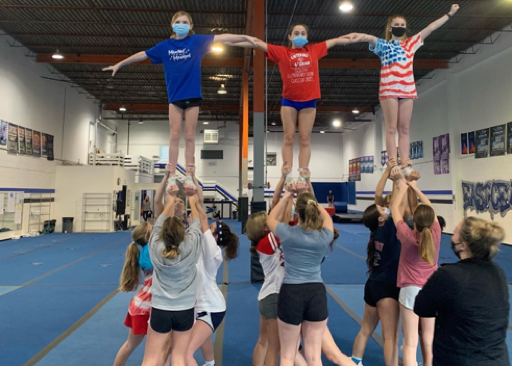 The NDA Cheer Team has let nothing hold them back from cheering this year! It was a rough start to the year, as no one was even sure if they would make it through the season. COVID-19 had been reeking havoc with school and sports for the better part of 8 months.  It seemed an steep uphill battle with more than a few impediments.  But no matter, NDA Cheer kept pushing on and meeting each obstacle with upbeat determination and perseverance. Okay, need masks: no problem! Social distancing: we can work with that! Remote student: we got that! The NDA cheer Team even included remote student Kyla Snyder. I talked to her about her experience being part of the NDA cheer team over zoom. Kyla, who had been a member of the squad last year, said that not much had changed, that the spirit of the NDA Cheer Team had never faltered. She has enjoyed her time on the team this year.  She was grateful to be able to talk with her friends, socialize and continue being part of Cheer.  When asked if she would do it again, she said that she should would do it again in a heartbeat because it was an amazing way to stay connected and be involved with her friends during COVID. She was able to be involved with every practice and this reminded her of last year as “it brought back good memories”.

The NDA Cheer Team did not allow COVID-19 to stop them from having fun. Even though football has been postponed because of COVID and it was unclear if they would ever be able to display the fruits of their effort, the entire team still has shown dedication and devotion.  The bond the NDA Cheer Team has formed held strong throughout the whole season. When someone fell there was always so many helping hands and supportive faces. In a time in which there is very little to cheer about, the NDA Cheer Team has shown resilience  and ingenuity to make sure each every member plays a part. This in and of itself is something to cheer!