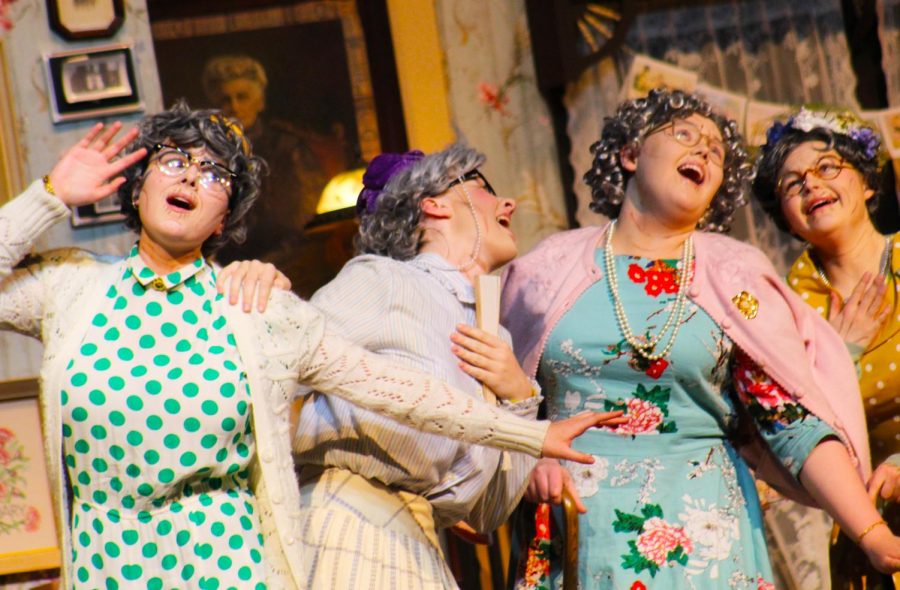 On Saturday morning, 24 students departed from NDA to partake in the Massachusetts Educational Theatre Guild Festival Prelims. They arrived at Hanover High School bright eyed and ready for an incredible day and began to unload their set from a rented U-Haul truck in preparation for their performance at 3:00. As soon as the group entered the school, they were greeted with warm welcomes from the Drama Club students of Hanover High. Soon the other schools began to arrive, and the hallways were buzzing with excited young performers and technicians ready to take on the day. A saying the Verity Theatre company has regarding the annual festival is “the only way to do it wrong is to come away without having met a new friend” and the NDA thespians definitely followed through.

At festival, the students split up and went around to each of the 7 other participating schools’ allotted classrooms to introduce themselves and deliver “psych packs” filled with goodies as a kind gesture. Before they knew it, the day of performances had officially begun. The day is split up into four plays in the morning and four in the afternoon, with a lunch break in between. Each school brings a one-act play that runs for a maximum of forty minutes and is allotted a maximum of 5 minutes to set up the set prior to the performance and 5 minutes to take it down afterwards. The other participating schools included The Clark School, Southeastern Vocational Tech, Weymouth High School, Hanover High School, Lynnfield High School, Everett High School, and Boston Latin School. The Verity Theatre Company was up sixth to perform their show “Anybody for Tea?”.

When it was time to begin getting into costumes, hair, and makeup, the dressing room was stirring with nerves and excitement. The cast of nine actresses remained upstairs to get ready while the tech crew began preparing the set for their 5–minute set up time. Before they knew it, it was time to go onstage and show the audience the show they had worked so hard on since the beginning of December. The show began and went off without a hitch. The audience was filled with laughter and smiles throughout the entire performance. The actresses and technicians came offstage beaming with pride and joy because they knew all of their hard work had paid off. All of the lines were said perfectly, and the lightning fast quick changes went very smoothly. The performance was concluded with the six actresses playing the elderly women in the show dancing to Beyoncé’s “Single Ladies” while the technical crew and three remaining actresses took down the set.

Once the show was concluded, the NDA thespians went back into the audience and enjoyed the remainder of the shows. After a pizza dinner and a dance, it was time for awards to be handed out. Celia Hidell ’21, Connaught Riley ’20, and Olivia Gauthier ’22 were given awards for their outstanding performances that day. NDA also won the coveted “Stage Managers Award” given to Sadie Maw ’22 and Delia Jasper ’23 for excellence in stage management. Congratulations to all on their incredible achievements!

Finally, the judges announced that Weymouth High School, Boston Latin School, and Everett High School were the three schools selected to move forward in the competition. It was an absolute pleasure to witness all three of the schools’ performances and the cast and crew of Anybody for Tea? wishes them luck as they continue their journey in the competition! Feeling exhausted but absolutely thrilled to have witnessed such an incredible day of theatre, the Verity Theatre Company departed for home. Congratulations to the entire cast and crew on such an amazing day! Special thank you to Ms. Russell, Mr. Minister, Kim, and Tophy – the show would not have been such a great success if it weren’t for all of your hard work!