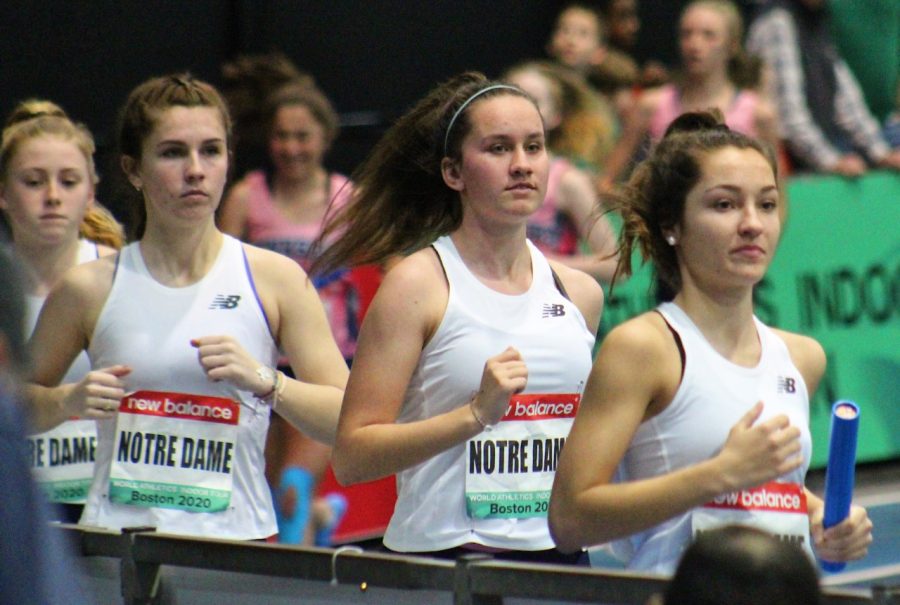 It was a wet, cool evening in Boston, the traffic lights reflected on the pavement shimmering in the rain. It would be a customary Saturday night at the Reggie Lewis Center if not for the long line stretching out the door and nearly around the corner.

Everyone was assembled to watch the annual New Balance Indoor Grand Prix, set to feature world-renowned indoor track and field athletes, from Olympians and world-record holders to high school-aged students who are up–and–coming stars.  NDA’s indoor track team, as well as thousands of other high school teams from all over the country, compete at meets at the Reggie Lewis Center almost every week.

My friend and I had rarely been at Reggie to watch a meet, as we were always competing.  As a member of the track team since middle school, I never really pictured I would be heading into the city to go to a meet that wasn’t my own.

This time, it was a different experience to have to enter through the front doors, have a ticket scanned by a young adult in a staff t-shirt and make our way in past the concessions to the fieldhouse.  As someone who had exercised the freedoms at normal league meets to dart across the track to the infield during another race, effortlessly jog onto it to warm up, and step up to the starting line just before the gun goes off, it was foreign and somehow breathtaking to see the track gated off from spectators.  Though the walls of the arena were draped in black and decorated with New Balance posters, that was the part that really struck home for me – this meet was serious, not the usual, run-of-the-mill high school meet I normally would attend.  Say you were to have the CEO of a company, or the President, come over for dinner. You would prepare your home, right?  The Reggie Lewis Center looked so different, so smooth, so beyond a regular high school athlete like me – because the very kings and queens of track and field had come to compete.  For the first time, I felt almost unqualified to stand behind the fence and survey the track, like a guest in what was my home away from home every winter.

The meet opened and we watched athletes from all over the world work wonders in their events. I was reminded why sports have always been so captivating – whatever the competition, ordinary people become superheroes.  We were particularly impressed with the women’s 300 meters, 2 mile, and 60-meter hurdles, as well as the men’s mile.  There were athletes from not only the United States, but from South Africa, Kenya, Australia, the United Kingdom, Germany, and Ireland, just to name a few.

We sat right behind the holding pen, which gave us a limited view of the track, but fortunately great access to the athletes after they finished their races.  We met several world-class athletes who are inspirations both on and off the track.  They were exhausted after their events, yet very down-to-earth, and stopped to take pictures and sign autographs for almost everyone along the side of the fence.  We took selfies with many of them.  Meeting our favorite professional athletes and winners from our favorite races felt unreal.  Younger children even received bib numbers from the competitors, who shook hands with the young fans’ parents and thanked them for involving their children in track and field.  Behind the scenes, track can be such a chivalrous sport.

“It’s a cool feeling knowing we ran in the same meet with such talented athletes,” said Shannon LeVangie ’20. “Before the race, I was very nervous but also super excited. I had never run in a meet like this before, so I didn’t really know what to expect.”

And, it was a difficult race – the girls faced some of the toughest competition they had all season, against four other high school teams from Massachusetts and New York.  However, they still finished with a new personal record and set a milestone for future NDA relay teams.

“I think the adrenaline I had is what really pushed me to run my hardest in the race . . . the competition was some of the best we have ever faced,” Shannon told The Medallion. “We had to give everything we had.”