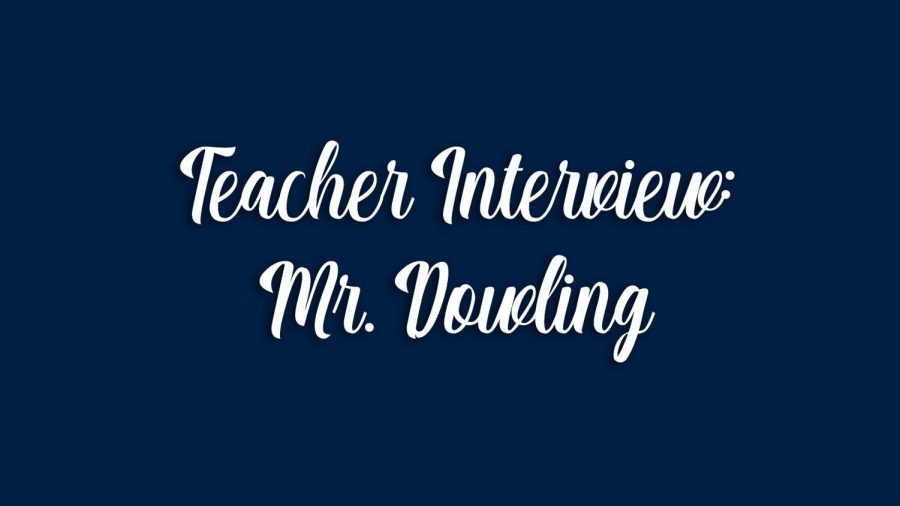 Mr. Dowling is one of our many new teachers this year. He currently teaches five different sections of Physics while previously subbing for Honors Biology. Currently, Mr. Dowling is in his 26th year of teaching high school, but he has had quite the journey to NDA. Let’s get to know him.

Mr. Dowling was raised in Trumbull, Connecticut alongside four siblings. In high school, Mr. Dowling was very active in sports. He played a sport for every season: soccer in the fall, ice hockey in the winter, and either golf or baseball in the spring. Sports was a way he bonded with his family; he painted a scene for me: “after school, we would come home, throw our bags down, and go outside to toss or kick around a ball.” Mr. Dowling was a decent academic student, but he admits that it should have been a bigger focus for him. In addition to sports, he was a member of the math and science clubs, and he worked different jobs.

At Boston College, Mr. Dowling majored in Biology. However, he originally entered as an undeclared pre-med student with aspirations to go to medical school through the U.S. Navy. While taking the scientific classes required for a pre-med program, Mr. Dowling tended to enjoy the biology classes more, and he ultimately graduated with a Bachelors Degree in Biology. Following college, Mr. Dowling worked as a chemical researcher for five years. During that time, he was a part of many projects that integrated different fields of science, and that was something he really enjoyed. A few years later, Mr. Dowling received his Master’s in Organic and Medicinal Chemistry at the Massachusetts College of Pharmacy and Health Science. This school might sound familiar as our beloved religion department chair, Sister Pat, also attended there. While completing his Master’s degree, Mr. Dowling started teaching classes and discovered his love for it. He spent mornings conducting research, afternoons teaching classes at MA College of Pharmacy, and nights teaching undergraduate Organic Chemistry at Harvard University.

While still teaching night classes at Harvard, Mr. Dowling started teaching at Cushing Academy for three years. From there, he relocated to Boston College High School, fondly known as BC High. He continued to teach college for twelve years and stayed with BCH for twenty-two years. Mr. Dowling said that although he enjoyed teaching at Harvard, he knew that his students were ones who already knew what they wanted to do. “High school students are in a state of discernment, and I wanted to help those students find what they want,” he said. Mr. Dowling also said that he was inspired to enter the science field because of his middle school Physical Science teacher and high school Biology teacher, and he hopes that he could have a similar impact on his students.

Mr. Dowling’s favorite part about educating at BCH was the school’s spiritual nature. He liked the emphasis on helping the students be better people: “no matter what career path the students choose to embark on, being a good person is more important, and I liked being able to help them with that.” Last year, Mr. Dowling left BC High because he wanted another opportunity to teach at a different place. He noted that there are lots of similarities between NDA and BCH. Mr. Dowling’s favorite part about teaching science is “seeing students begin to appreciate what the subject does for us” as it surrounds us in our daily lives.

Outside of NDA, Mr. Dowling works with the Boston Red Sox as an Event Operations Supervisor. He started as a part-time usher for two years, and now he manages a group of people who organize events like baseball games. He loves the excitement surrounding the events and managing any crisis that may take place. Mr. Dowling summarized his job in a simple statement that I believe applies in more cases than just this one: “If people aren’t happy, I try to make them happy.” It seems as if his love of sports has persisted as he also loves to run and play soccer. He also noted how much he enjoyed watching his children compete as athletes when they were younger.

One of Mr. Dowling’s favorite parts about teaching is the reunions. He loves being able to “see that some of [his] efforts bared fruit” when past students tell him that they are working in the scientific field. During high school especially, Mr. Dowling has the ability to instill an interest in a science career path in his students which could evolve. “As a teacher, you see promise, and you hope they actualize that promise,” Mr. Dowling commented. He acknowledged that the high school years can be chaotic, but he doesn’t mind it. Rather, he tries his hardest to “give structure so students can find structure.” Any of his students can see that through Mr. Dowling’s binder organization requirements. Although this is only his first year at NDA, Mr. Dowling says he already has two favorite memories made here. His first is President Kenneally’s installation liturgy: “I was moved by the installation mass when the sisters imposed hands on Mrs. Kenneally; I’ve seen priests do it but not sisters, and I realized this signalized an important event of sisterhood.” His other favorite NDA moment so far is Heritage Day. He enjoyed watching nonacademic talents of the students in the talent show, but most of all, he remembers the overwhelming support of the performers by the student body. He hopes that that kind of support can increase in abundance everywhere. He said, “In the world, people are so quick to judge, and they should be more ‘quick to support.’”

Mr. Dowling’s final advice to the student body is to “believe in yourself and take chances.” He explains how he looks back and focuses on all the good choices he made. He admits that some of them were risky, but it was worth it: “taking risks help you take control of your life.”

Mr. Dowling, thank you for being such a great addition to our school and community!

Going into Mr. Dowling’s interview, I wasn’t sure what to expect. I have him as an AP Physics teacher, so I know him only in that setting. I was excited to hear about his journey and how it brought him to our school, but like with any story, there are endless possibilities. The first thing I noticed about Mr. Dowling when I entered his class what his very tidy organization method. Like everyone else, I also noticed his extremely neat handwriting. To me, that part of his personality made sense as physics is a very detail-oriented science that requires immense organization.
There was one thing that really confused me about Mr. Dowling’s class before this interview: his binder organization requirements. I didn’t understand why everyone had to follow the exact system for organizing. However, after this interview, I have developed a greater appreciation for Mr. Dowling’s organization requirements.
I learned a lot from this interview, but it was Mr. Dowling’s comments on self-confidence that really stuck with me.
Delete Image
Align Left
Align Center
Align Right
Align Left
Align Center
Delete Heading