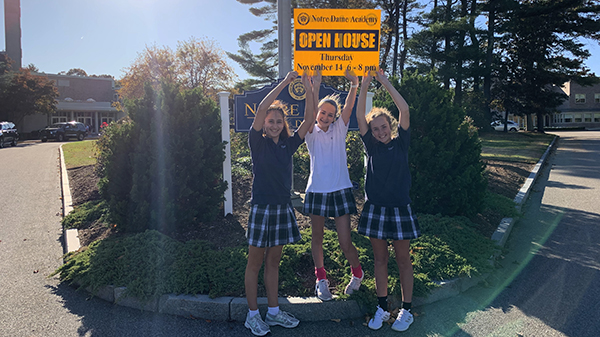 This past weekend, NDA was buzzing with excitement as it was our first open house of the year! After weeks of preparation from members of the 1804 Society, as well as captains and presidents representing their team or society, the day had finally arrived. The day in its entirety was a team effort! Seventh and eighth graders were stationed outside and around the building cheerfully greeting and guiding our guests. The remainder of the 1804 society members gave tours around NDA and were broken up into two groups: Cuvilly tour guides and High School tour guides. The day started off with a welcome to all prospective students from Mrs. Kennelly, and then the tours began! Throughout the tour, prospective students were able to see students performing science experiments, doing some Chinese calligraphy, and hear from them about some of the amazing programs NDA has to offer. The NDA mascot even made a special appearance! At the end of the tour, families were able to chat with some of our amazing sports captains to find out about NDA’s incredible athletics. Thank you to everyone who made such a great example of our amazing school and helped to make the first open house such a huge success!