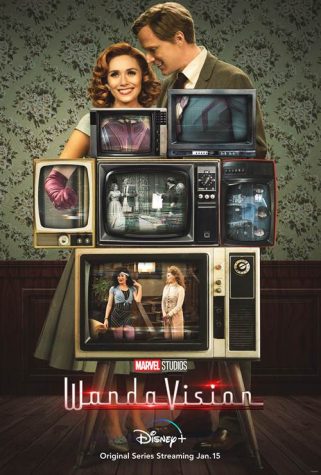 Marvel’s WandaVision was an iconic series to say the least. Marvel went above and beyond in creating their first sitcom series and beginning the fourth phase of the Marvel Cinematic Universe (MCU). Throughout the series, the show makes references to other comics, MCU movies, and iconic sitcoms that came before it.
Episode 1: Filmed Before a Live Studio Audience (30 minutes)

The beverage that is served during the dinner party with the Harts is called Maison du Mepris. This roughly translates to “House of Contempt,” which appears to be a reference to the comic series “House of M.” “House of M” is one of the most famous Scarlet Witch storylines. It follows Wanda as she suffers from a mental breakdown and tries to alter the fabric of reality to recreate her lost children.

Wanda’s joke about “my husband and his indestructible head” is a reference to Vision’s death in Avengers: Infinity War, when Vision’s skull is crushed by Thanos and the Mind Stone is ripped from Vision’s forehead.

In this episode, the commercial features the ToastMate 2000 by Stark Industries. We see the first hint of color (red) when the toaster’s light blinks. Also in the commercial, you can hear what sounds like Tony Stark’s repulsors. It is easy to conclude that this commercial must be alluding to Wanda and Stark’s relationship. As many people know, Stark’s weapons (which he sold before becoming Iron Man) were used to bomb Sokovia, the country where Wanda and her twin brother Pietro lived as children. Unfortunately, the twins’ parents were killed after the first bomb went off. Although a second bomb is dropped very close to the twins, it never goes off. The toaster’s prolonged blinking could be a reference to this bomb, as the ad is made by Stark Industries.

At the end of the commercial, a phrase appears on the scene saying “Forget the past, this is your future!” This could be referring to a scene from Avengers: Age of Ultron in which Wanda forgives Stark and joins the Avengers. 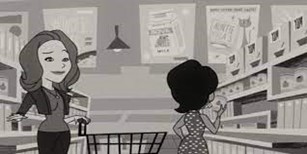 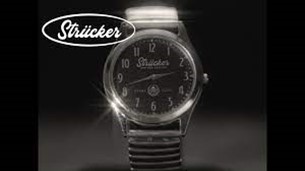 This episode features references to Illusion and Glamor. In the Vision and the Scarlet Witch comics, Illusion and Glamor were characters.  Now in the series, they are stage magicians who are friendly neighbors of Wanda and Vision.

The opening credits in this episode (which are accompanied by the AMAZING intro music) is very much a Bewitched style animation. Wanda and Vision’s neighbor Agnes is also thought to mirror the Bewitched character Gladys Kravitz, the neighbor of the witches in Bewitched and known for being nosey (just like Agnes). The episode also appears to take inspiration from another sitcom, I Dream of Jeannie. This sitcom was about a magical woman, a genie, who was trying to fit into a normal life.

This commercial advertises a Swiss-made Strücker watch. The watch’s design features the Hydra logo on the face of the watch. The name of the watch, Strücker, references Baron von Strücker, the man who conducted human experiments on Wanda and Pietro using Loki’s Scepter (which is powered by the mind stone), causing them to gain their powers. The phrase at the end of the commercial, “Strücker: He’ll make time for you,” could refer to the time Strücker dedicated to experimenting on the twins after they acquired their powers. “Swiss-made” could be referring to the Swiss-born Hydra scientist, Arnim Zola, who made appearances in the first two Captain America movies. Although Zola and Wanda never crossed paths in the MCU, it is possible that Zola could’ve helped create the experiments that Wanda and Pietro were involved in.

This episode references Marvel comics, in which Wanda has two twin sons named Tommy and Billy. They eventually become superheroes, known as Speed and Wiccan. To give her children souls, Wanda used slivers of Mephisto’s life essence.  This eventually backfires when Mephisto reabsorbs them and the twins cease to exist.

This episode takes a lot of inspiration from The Brady Bunch. The use of hexagon graphics in the opening credits is very similar to the layout of The Brady Bunch’s closing title card. The interior of Wanda and Vision’s house mirrors the interior of the house in The Brady Bunch. Many viewers were quick to recognize how similar the staircase in Wanda and Vision’s home is to the iconic Brady Bunch staircase. The doll that Vision uses to practice changing diapers looks just like one of Cindy Brady’s favorite toys, Kitty Karry-All.  The opening credits pay homage to not just The Brady Bunch, but also The Mary Tyler Moore Show, another popular sitcom, with expanding colorful text on the opening title card.

This commercial continues to reference Hydra, yet again the sponsor of the ad. The part where the woman in the commercial says, “You read my mind,” could be referring to Wanda’s mind-reading abilities, and the ending phrase, “Escape to a world all your own, where your problems float away,” could be referring to Wanda’s new, safe reality that she creates.

Episode 4: We Interrupt This Program (35 minutes)

Monica Rambeau was first seen as a child in Captain Marvel.  Her mother was Maria Rambeau, who was good friends with Carol Danvers (a.k.a., Captain Marvel). Her mother also founded S.W.O.R.D.  When Monica comes back to S.W.O.R.D., there’s a brief closeup of her name and her old Air Force callsign, “Photon.” In the comics, Monica is a superhero who is best known as Photon.

Darcy Lewis has been in multiple Thor movies, known as Jane Foster’s assistant and good friend.

In Tom King’s Vision series, there is also a dog named Sparky.

In this episode, Evan Peters’ Quicksilver makes a surprise appearance as Wanda’s long-lost brother Pietro. Peters played a version of Quicksilver in Fox’s X-Men movies, but until this point did not play Pietro Maximoff in the MCU.

This episode is full of references to iconic TV shows and sitcoms from the ‘80s and early ‘90s. The director of WandaVision was a child actor in the Growing Pains spinoff, Just The Ten of Us, and used his ties to the decade to his advantage while directing this episode. Elizabeth Olsen, who plays Wanda, also has ties to this era, as her twin sisters Mary-Kate and Ashley Olsen starred in Full House as Michelle Tanner when they were children.

At this point in the series, it becomes clear that the commercials are references to major parts of Wanda’s past. Following that theme, this episode’s commercial refers to the Lagos incident at the beginning of Captain America: Civil War. In Lagos, Wanda, alongside several other Avengers, attempted to capture Rumlow, a weapons dealer, when he infiltrated the IFID (Institute For Infectious Diseases). After being captured by Captain America, Rumlow activates a suicide bomb, which Wanda attempts to contain in a ball of energy.  Accidentally, she flings the energy up into a building full of civilians.  The phrase “Lagos: For when you make a mess you didn’t mean to” refers to Wanda’s accidental “mess” in Lagos. This was very important to Wanda’s past because Lagos was one of the first times she realized the full extent of her powers.

Although Wanda & Vision claim to be dressing up as a Sokovian fortune teller and a Mexican wrestler, fans recognize their outfits’ resemblance to their costumes in the comics. Pietro’s costume reflects his original look in the comics, featuring his silver and blue outfit and silver hair. Tommy and Billy also dress up in outfits similar to those they wear in the comics after they have become superheroes Speed and Wiccan.

The local Westview movie theater is showing The Incredibles, a movie about a superhero family just like Wanda & Vision’s family, and The Parent Trap, a movie about twins and fake identities – just like in WandaVision.

This episode takes inspiration from the early 2000s sitcom Malcom in the Middle. The opening intro appears almost identical in style, as a very similar font and alternative rock theme song are used.  As in previous episodes, Wanda and Vision’s house changes to resemble the house from the period sitcom that the episode references – in this case, that from Malcom in the Middle.

This spin-off of the popular stop-motion Claymation commercials from the ‘90s was probably the weirdest and most unsettling commercial in the whole series. Unlike the other ads, it has no mention of anything from previous MCU productions, and doesn’t reference something from Wanda’s past. This commercial is thought to refer to Wanda’s history of death, starting with her parents, then her brother, and most recently Vision.  In the commercial, a child is stranded on an island without any food, and then is given a Yo-Magic, but he can’t open it. The commercial ends with the child’s body decaying. This might be a reference to Wanda’s inability to reverse death using her magic. She constantly feels the weight of survivor’s guilt, especially after losing almost everyone she is close to.

Wanda pours herself a bowl of “Sugar Snaps” cereal while suffering from a mental breakdown. The name of the cereal is a reference to Thanos’ infamous snap. The clown mascot on the box also probably references to the S.W.O.R.D. agents who were caught in the Hex and joined the circus.

In this episode, one of the best musical creations of the MCU, “Agatha All Along,” is dropped,

Like the last commercial, this commercial doesn’t relate to anything with Wanda’s past, but more to her feelings that are weighing her down. This commercial focuses more on her current state of mind, as she is feeling depressed and overwhelmed. The Hex is glitching for reasons she can’t figure out and she doesn’t even try to find where Vision is.  The name of the featured brand is no mistake. In the comics, Nexus can also be referred to as the Nexus of All Realities, which is the gateway to multiple realities. Scarlet Witch is actually considered a Nexus being, which is one who belongs to all possible timelines (all the realities and divergences).

The phrase “I can’t feel you” is a reference to Vision’s last words in Avengers: Infinity War. When Wanda removes the Mind Stone from Vision’s forehead, he tells her that he doesn’t feel pain: “I just feel you.”

The red heart drew on their deed to their Westview house shows up multiple times throughout the series. It is shown first on the calendar in Episode 1, and again on another calendar in the opening scene of Episode 7.

When Wanda transforms Westview and puts the town in the 1950s, the way she builds her house has a similar aesthetic to “House of M.”

The local movie theater advertises the 2013 Oz the Great and Powerful, directed by Sam Raimi. This is a reference to how he will be a part of Marvel’s 2022 show Doctor Strange in the Multiverse of Madness. Another Wizard of Oz reference is seen when Wanda throws a car at Agatha, and Agatha is sent crashing into a house. When Wanda goes to check on Agatha, she only sees Agatha’s black boots – a direct reference to the Wicked Witch, who was crushed by Dorothy’s house.

In this episode, Agatha confirms that Scarlet Witch is even more powerful than the Sorcerer Supreme (Benedict Cumberbatch’s character Doctor Strange). In the final credits, Wanda is shown taking a page from Doctor Strange’s book using astral projection to study the Darkhold.

Monica Rambeau meets a Skrull disguised as an FBI agent. The Skrull tells Monica that one of her mother’s friends wants to meet with her in space. This friend of her mother’s could be Nick Fury or the Skrull Talos, but regardless, it is clear this reference is a setup for a Captain Marvel sequel.