Mrs. Bianchi is our very lively science department chair. She has been an inspiring member of our community for six years in which she has taught all levels of Biology, including IB Biology, Physics, Cuvilly Science, Medical Neuroscience, and summer courses. She also runs multiple STEM clubs such as LEGO Robotics. Mrs. Bianchi is also iconic for her love of her pets and her “dog door”. This is how one of her students describes her: “Mrs. Bianchi is very driven, motivated, and she genuinely cares about our well-being. She always goes out of her way to help us understand the material.” Let’s get to know her!

Mrs. Bianchi’s love for teaching started at a young age, and it grew to become a big part of her identity. As the oldest of five children, she would often spend time helping her younger siblings with music and school work. Throughout high school, she continued to teach by giving violin and viola lessons. She was a very active student; she took challenging classes, played in orchestra both at school and in the New England Conservatory, and volunteered at a library. She noted that her history teacher had once called her a stalwart, something we can all agree she still is.

A lover of all sciences, Mrs. Bianchi found her fascination of neuroscience in her high school AP Psychology class. She spoke about how “our brains are plastic, and we continue to mold them every day”. Her passion about neuroscience was very clear, and we conversed about the infinite possibilities within the topic. She said, “Genes don’t completely define us because when we apply effort, we can become more and do great things.” Mrs. Bianchi connected her love of neuroscience to her love of teaching as she sees teaching high schoolers as a way to help students develop during a time when they are evolving.

At Smith College, Mrs. Bianchi majored in Neuroscience. There, she diverted from teaching for a while and found an interest in research while studying visual systems of ferrets. She emphasized how it was especially captivating because she was able to study the development of the creatures’ eyes as they developed outside of the mother’s womb. Mrs. Bianchi continued on the path of research at Boston University School of Medicine where she received her master’s degree in Neurobiology. During that time, she published a paper on post mortem brain tissue of people with and without autism. While in graduate school, Mrs. Bianchi had to student-teach. There, she realized how much joy she had when teaching.

Mrs. Bianchi started teaching at NDA in 2010, but she had left to teach at St. Sebastian’s a few years later. She loves the interaction among the students in the STEM subjects. She emphasized how “high school is pivotal time to build confidence in STEM, especially for girls”. Mrs. Bianchi expressed how an interest in the sciences can have a positive impact on a female if they choose to pursue it. Being able to have such an influence in nurturing students is one of her favorite parts about teaching. Like all teachers Mrs. Bianchi also enjoys watching students grow, especially if they’ve struggled along the way: “I love taking difficult concepts, breaking them down for students, and seeing that eureka moment when they start to understand the topic.”

One of Mrs. Bianchi’s most special moments here at Notre Dame was meeting Mr. Bianchi for the first time. They had worked together testing out the 30 Hands programs by combining probability with genetics. They had even presented their research together at a few conferences. Although she left NDA for a while, they reconnected when Mrs. Bianchi asked Mr. Bianchi to tutor her younger brother in math. Over a year, they grew closer, and one spring day, on a bridge in a water garden, Mr. Bianchi proposed. On a sunny, August day in 2014, they were married. Later, Mrs. Bianchi returned to NDA to teach us about neuroscience and photosynthesis.

Creating a medical neuroscience club and class is another of Mrs. Bianchi’s favorite memories. She was so glad to see students have such a passion for a topic. To Mrs. Bianchi, NDA is special because it is dynamic: “it’s always evolving, and people are always innovating and trying to improve.” She also enjoys the many opportunities to build knowledge around the STEM subjects.

Outside of NDA, Mrs. Bianchi spends a lot of time with her dogs Gracie and Coco, watching them develop, taking them on hikes with Mr. Bianchi, or training them. She i 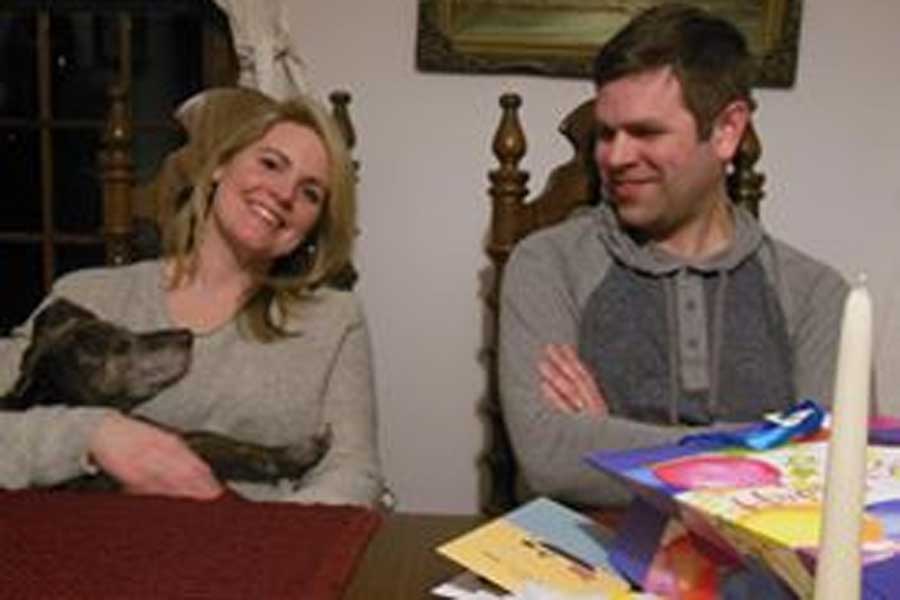 s intrigued by how dog training is a way of communication. Mrs. Bianchi also loves to bake, travel (with her dogs if she can), play the viola, and of course spend time with her family and friends.

When I asked Mrs. Bianchi if she had any final advice for the student body, she pointed at the quote on her wall: “Relationships are the essence of life.” She added, “Hold sacred all of your relationships with others and have faith.”

Thank you for your dedication to our community, Mrs. Bianchi!