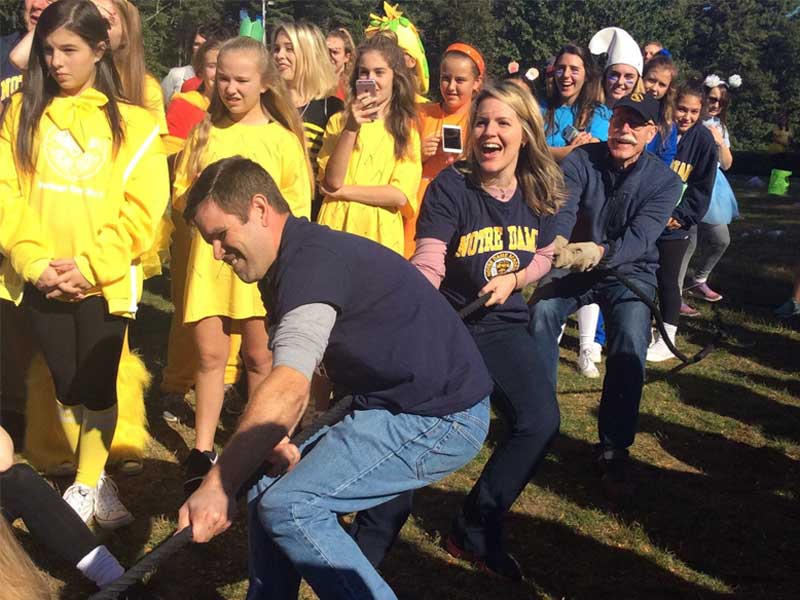 Mr. Bianchi is our esteemed math department chair here at NDA; he’s taught many math classes including Geometry, Algebra 2, AP Calculus, and more recently, he has been teaching summer math courses at here at NDA. He has been a devoted member of our school, having been here for 18 years so far. Many students know him to be very dedicated to helping his students. When I first walked into his room for this interview, he was giving extra help to ensure that his students understood the material. One common saying that students associate with Mr. Bianchi is “quadratic which means . . . ‘x’ squared.” Let’s get to know him!

In high school, Mr. Bianchi was quite shy, but he gained many friends throughout. He took every Advanced Placement class offered at his school (AP Calculus AB, AP Literature, and AP US History) and graduated valedictorian. Mr. Bianchi was a member of the creative writing club and president of the American Field Service—a club that supported foreign exchange students and organized events. Sometimes, he would go hiking with his mom in the Appalachian Mountains; though he admitted he didn’t find it very enjoyable, he said it instilled an interest that later surfaced. Even though Mr. Bianchi wasn’t very artistically inclined, he tried to teach himself the piano and eventually learn a few songs.

Mr. Bianchi went to college at Boston University where he received a bachelor’s degree in both Mathematics and English. Although majoring in two opposite subjects was challenging, he enjoyed how he could switch between them and use different thinking styles. During college, Mr. Bianchi pursued creative writing and wrote his own novel, but unfortunately, it wasn’t published. “From there, I shifted to writing math textbooks,” Mr. Bianchi said as he showed me his Algebra 2 textbook. At graduation, Mr. Bianchi had to choose which department to graduate with. Surprisingly, he chose the English department, but then continued on to teach mathematics.

Immediately following college, Mr. Bianchi started teaching here at NDA. For a while during the interview, he reminisced about his earlier years here:

“When I started teaching here, the nuns were still living in the area that now holds the campus ministry and advancement offices. I was what people called a ‘floater’: I didn’t have my own classroom, so I taught different classes in different rooms. I did teach one math class in my current room. My office was in the basement of the convent where it was quite different than it is now.”

While teaching here, Mr. Bianchi attended UMass Boston and earned a master’s degree in Math Education. In 2010, Mr. Bianchi met Mrs. Bianchi when she started teaching here as a science teacher. One year, they collaborated on a math-science combined unit about genetics and probability. As they worked together, they grew to be close friends. Later, Mrs. Bianchi left NDA to teach at St. Sebastian’s, but she asked Mr. Bianchi to tutor her younger brother in math. There, they reconnected, and they eventually started dating. In the summer of 2014, they were married surrounded by family, friends, and NDA colleagues. Two years later, Mrs. Bianchi returned to NDA and became our science department chair. Mr. Bianchi admitted that quite a few people mix them up.

Outside of school, Mr. Bianchi spends his time outdoors. He has lots of gardens and enjoys landscaping as he sees it as a form of art and creativity. Photography is also one of his hobbies; this complements how much time he spends outdoors. During the summer of 2013, Mr.

Bianchi, drove across the United States, ending in British Columbia, Canada. During this road trip, he traveled about 9,000 miles, took a boat ride on Lake Superior, and saw about 10 national parks including Yellowstone and Glacier. His favorite was Yellowstone because of the beautiful combination of mountains, canyons, and geysers. He also hiked the Rocky Mountains which even in July, had snow. However, he found the snow refreshing in the summer heat. Along the way, he encountered lots of wildlife including bears, moose, and mountain goats. While not outdoors, Mr. Bianchi enjoys reading, particularly about history. However, his favorite novel is ‘Lord of the Flies’. Occasionally, Mr. Bianchi sings in church with accompaniment by a pianist and Mrs. Bianchi on the viola.

Teaching was always part of Mr. Bianchi’s nature as he comes from a family of many teachers. He also enjoys sharing knowledge in the world and said that outside of school, people can identify him as a teacher. “I’m very interested in knowledge of all sorts and sharing knowledge,” he said. Mr. Bianchi loves how teaching isn’t very routine: “Every day is a little different and progress is always being made.” When I asked him if every year is similar, he responded, “No because you’re not always teaching the same subject, and even if you are, you’re not always teaching it the same way.” To him and all teachers, teaching is a learning experience and a time to try new things. One of his favorite parts about educating is seeing the progress in students as they strive to do better: “I think every year, there’s one person or a few people that start off in a difficult time. I like knowing I can help them understand the topic and seeing that progress.”

If he could teach a subject other than mathematics, Mr. Bianchi would, of course, teach English. However, he also said he would enjoy teaching history. If he were to bring a class to NDA and teach it, he would bring meteorology. However, Mr. Bianchi has already brought a new class to our school. Over a year ago, he created a hybrid Calculus BC and multivariable calculus class for advanced students to complete four years of math.

Over his many years here, Mr. Bianchi has created countless memories. None of which he could choose a favorite. He noted how much fun he had leading faculty hikes around Massachusetts. After a lot of thinking, he admitted he simply couldn’t choose. However, he said that one of his funniest memories was when he escorted Sister Adrienne to Junior Prom a few years ago.

Finally, Mr. Bianchi had some advice: “Keep on working your hardest. If life knocks you down, get back on your feet. Even though you may get knocked down a few times, if you work hard, eventually, you’ll succeed.”

Thank you for being such a core member of our community, Mr. Bianchi!