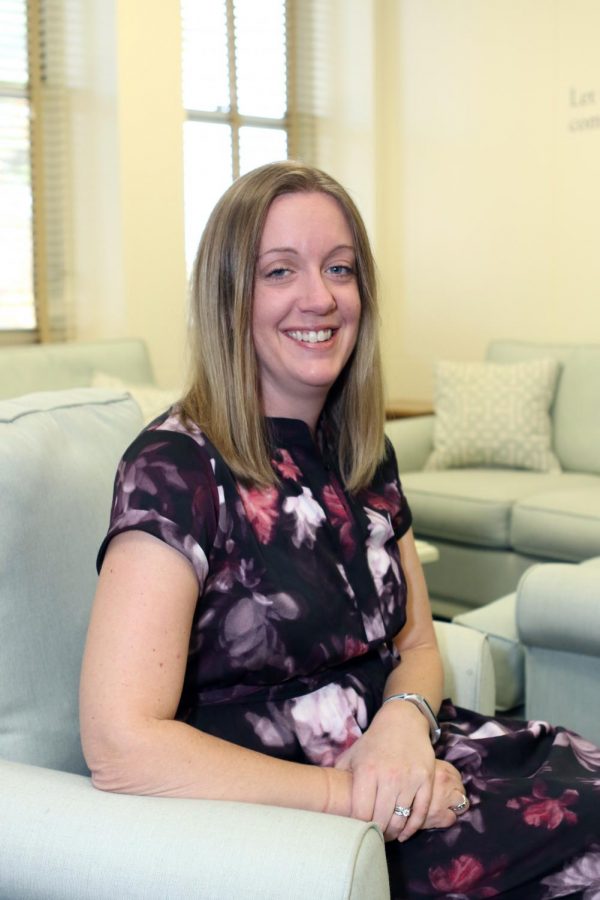 Mrs. Dawson is our new music teacher here at NDA. She teaches all the Cuvilly students in either general music, instrumental ensemble, or choir. For high schoolers, Mrs. Dawson conducts the Instrumental Ensemble and choir group known as Select Choir, teaches piano class, and her one major course, which is AP Music Theory. Every month, the Select Choir performs at our school’s liturgies, and twice a year all musical performance classes showcase their talents at a concert. These past months, Mrs. Dawson has worked with Ms. Rusell to put on the amazing school musical, ‘Chicago’. On Saturday, December 15, the Christmas concert will take place at 3.pm. with performances by all classes.

When asked to tell a little bit about herself, Mrs. Dawson said that she loves people, and she loves to laugh: “I’m a big kid. I’m just pretending to be an adult”. She has worked in schools for a long time as a music therapist before this position, and over that time, she “gravitated towards education”. Mrs. Dawson spoke about how her favorite part of teaching is “being around the students and watching them grow in confidence and knowledge”. Like many other teachers, she emphasized how it excites her to see who her students will one day become and how she played a role in their evolution. “I love watching my students discover their abilities and helping them understand concepts that they don’t currently know”.

In high school, Mrs. Dawson was more quiet and shy. “I was smart, involved in music, and performed in shows. I swam on the swim team, played field hockey, and had a job”. It seems as if Mrs. Dawson could relate to all of us in some way. She said that if she were to give her younger self advice, it would be “Trust in yourself!”

Mrs. Dawson is a graduate of both Duquesne University, where she majored in Music Therapy, and Colorado State University, where she got her master’s in Music Therapy. Originally, she went to college for a degree in Music Education, but she later transferred to Music Therapy. She attributes this to her love of psychology. Mrs. Dawson is a huge advocate for social justice; she loves helping the less privileged and making a difference. Her love of teaching and helping others connects with being a teacher (and being a music therapist) as it is a way for her to have an impact on others.

Outside of school, Mrs. Dawson spends a lot of time with her husband, children, and pet dog. Like the rest of us, she loves to binge watch television and movies, but she enjoys a good book and listens to many on her way to and from NDA. Her favorite musical is ‘Miss Saigon’; she loves the music (of course), and she describes it as “emotionally powerful”. In her free time, Mrs. Dawson enjoys spending time in nature, often gardening or hiking. She loved seeing and hiking the Rocky Mountains during her graduate school years, and looks forward to more nature adventures in the future. With the holidays coming up, I asked what her favorite holiday tradition is, and like most people, she loves “being with [her] family” especially on Christmas Eve, while exchanging Hallmark cards.

To keep the same format as the other teacher interviews, I asked Mrs. Dawson, “If you could get rid of one state, which one would you choose?” She thought it was a strange question, originally answering “Florida”, but her love of Disneyworld caused her to quickly withdraw her choice. She ultimately said “I would get rid of the entire South, besides Texas, because I lived there and have close friends there”.

Finally, I asked our new music teacher about her experience at NDA so far:

“At NDA, it’s a complete team. Everybody is helpful and positive. It’s a really inviting environment. My favorite memory at NDA so far was Heritage Day. I loved seeing everybody outside of class and just being themselves. I am most looking forward to an entire year of successful performances”.

Mrs. Dawson had some final advice for all NDA students: “Give it your best shot. Accept the results. Move on.”

Thank you for being an amazing addition to our school, Mrs. Dawson!